“In a sense the limitations of Orientalism are, as I said earlier, the limitations that follow upon disregarding, essentializing, denuding the humanity of another culture, people, or geographical region.” ~ Edward Said

The first time I read Edward Said’s “Orientalism” was when I was doing my Master’s in Literature, back in 2008. I remember signing up to do a seminar about it. I also remember my professor guiding me to refute Said’s argument. That the West “others” the East because of their admiration of our goods, culture, ethnicity, and beauty.

I didn’t know any better, and did so much research that week in order to formulate an argument I didn’t believe in. Here is what I believed in:

During that seminar, my own people argued against me. Or in better terms, schooled me. What’s shocking, is that I didn’t feel like I’ve failed, or embarrassed. I felt like this was the first time ever someone was showing me how to have a proper conversation about race. Conversation that involved theorizing and synthesizing.

You see, in school, when I was doing my BA, many of my professors encouraged critical thinking, with discussions, showing other point of views, etc. However, this was different. This theorizing, and synthesizing related to something I truly care about: my race, my culture, where I am from, and all of that in relation to how the West treats us as a result. This directly impacted me. 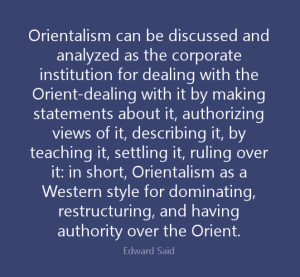 So I started to listen more, I started to absorb more. I also started to ask a lot of questions. Some of the questions were a little bit embarrassing to ask, because I felt like I should know the answers to them. After all, wasn’t I an “other”? Wasn’t I marginalized in this society and I should know my position, power relations around me and how it impacts me and others?

During my MA I learned so much about race and how to have race conversations, that I’ll always be ever so grateful to those folks who engaged with me and taught me how to engage. They were my fellow students, and very rarely it was a professor. We talked about the concept of “unveiling”, we unpacked “the male gaze”, who’s “othered” and so many other concepts that seem natural to me to enter in a conversation about.

I guess what I am trying to say is that sometimes having conversations about race or other tough issues may seem natural for some, but it isn’t. Or at least, it probably wasn’t at some point of time. It’s okay to be uncomfortable, make mistakes, and even get it wrong. Totally wrong. What was I thinking to let my professor tell me what position to argue? Especially when it’s detrimental to others’ understanding of my own culture.

And that’s okay, because I learned from it.

Always learning. This will never change.

One thought on “The Toughest Lessons Learned: Conversations on Race”